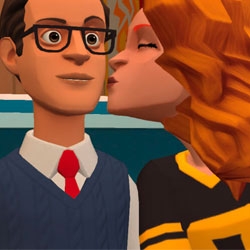 Stockholm, Sweden, June 01, 2017 –(PR.com)– Animation pioneer Plotagon has launched its first Android app optimized for the latest Google Chromebooks, which now dominate the growing K-12 Schools computer market. The application, which is already available on PC, Mac and mobile platforms has now been designed to run on Android-compatible Chromebooks. This brings the Red Dot award winning user experience of creating animation through writing to schools around the world.

Plotagon Education, a popular program among teachers and students worldwide, allows users with no animation skills to create 3D characters and movies. Because it is a downloadable application, earlier Chromebooks, which were limited to web-based programs, were unable to run the program. The new Android app allows Chromebook users to enjoy the same rich content features using their Google Classroom logins and automatically save their content to their Google Drive accounts.

“Chromebooks are an important part of the future of K-12 education, but until now they have been unable to run graphics-intensive software,” says Niss Jonas Carlsson, Head of Education for Stockholm-based Plotagon AB. “For the first time, teachers and students can get on Chromebooks the same experience they are used to with desktops, laptops, and tablets.”

As part of the new product launch, for a limited time Plotagon is offering free one-year Plotagon Education subscriptions to teachers and other education professionals. “We want teachers around the world to see how they can turn the written word into movies, and make literacy education more fun and engaging,” says Filip Grufman, Plotagon’s CEO.

Teachers at all levels are using Plotagon in their classrooms for topics like English Language Arts, English Language Learning, foreign languages, social studies, and even helping children understand and improve social skills. Plotagon offers a range of licensing options for schools so students can make their own movies on Android-enabled Chromebooks, Mac, Windows, iOS, and Android devices.

Plotagon AB is an innovative Swedish startup founded in 2011 to create a one-of-a-kind application that allows users to create animated videos and characters just by typing. The Plotagon team consists of programmers, artists, animators, designers, musicians, marketers and storytellers working at the company's headquarters in central Stockholm. More information about Plotagon can be found at: https://plotagoneducation.com