The Beersheba Charge, the UN, and End of the World 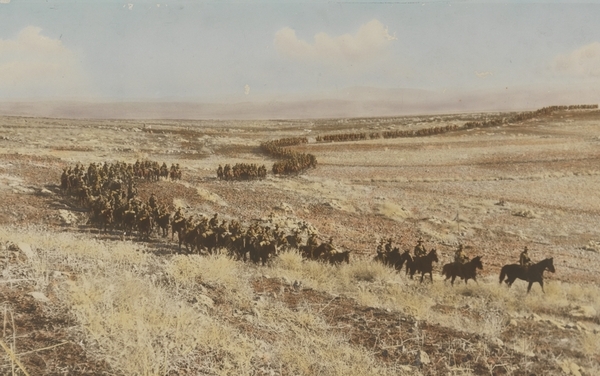 The land that was prophetically given to the Jewish people released in one year by the ANZAC and Allied Forces, parted by the UN and site of the final battle.

BEERSHEBA, ISRAEL, October 31, 2017 /24-7PressRelease/ — The re-enactment, October 31, 2017 in Beersheba, Israel, of one of the most successful mounted infantry charges commemorates the miraculous victory 100 years earlier. The Battle of Beersheba preceded victories at Jerusalem, Jericho, Bethlehem, Nazareth and Megiddo. The day the charge took place in Beersheba, October 31, 1917, the British Cabinet was discussing policy and support to establish “a national home for the Jewish people” which statement was issued in the Balfour Declaration a few days later on November 2nd, 1917.

Many of the 800 Australian Light Horsemen believed Bible prophecy concerning the Jewish people returning to their land. Some believed they were in some way fulfilling biblical prophecy through their involvement in this campaign by delivering the land of Israel out of the hands of the Ottoman Turks, who had occupied it for 400 years.

The charge of the 4th Light Horse Brigade was pivotal to the success of the British Allied Middle East Campaign. After an arduous journey through the desert, the horses had been without water for over 36 hours, and the sun had nearly set. The horsemen were ordered to charge. It was a do or die event. The horsemen’s speed was such that the Turkish gunners couldn’t adjust their artillery sites fast enough and shot over their heads. The light horsemen jumped over the enemy trenches and took the city. That night, the Australians were watering their horses at Abraham’s well in Beersheba.

The 3,900 year old Bible verse regarding Israel’s Promised Land states, “In the same day the LORD made a covenant with Abram, saying, Unto thy seed have I given this land, from the river of Egypt unto the great river, the river Euphrates:” (Genesis 15:18)

The Ottoman Empire, which was over 500 years old, and controlled much of the Middle East, was overthrown in what was called the Sinai-Palestinian Campaign. About one year from the Balfour Declaration being made, the British Allied Campaign took control of strategic sites, including Jerusalem, Amman, Damascus and Aleppo, the land stipulated in the Bible for the Jewish people. The Sinai-Palestine Campaign referred to the offensive of the Ottoman Empire, which is vastly more extensive than the small sliver of land now called Israel.

All the land was miraculously given into British possession. The heart of the British Cabinet, France, Italy, Russia, and the United States, was to give a homeland to World Jewry. If the land had been given to the Jewish people at the time, perhaps the Jewish holocaust could have been avoided as European Jewry could have settled sparsely populated land.

Why didn’t Britain hand it over?

The forces that eventually formed the League of Nations, and later, the United Nations, politically bargained the borders with the said goal of preventing another World War. Instead of Britain handing over the conquered land to the Jewish people directly, the land was later divided by the League of Nations. After some years various borders were established inside the biblical boundaries of the Jewish Promised Land, called Palestine at the time, which today includes Lebanon, Syria, Jordan and Iraq.

The stated goal of maintaining world peace and preventing another world war by the newly formed League of Nations was an utter failure as we see World War II eventuated a short 21 years after its formation in 1920. Political pressures are the nature of politics, but failing to give the land to the Jewish people by yielding to international pressures, in this case, contributed to the Jewish holocaust of six million lives lost and the death of 61 million in World War II.

The League of Nations which eventually became the UN, despite their resolutions, has continually failed to provide peace in the Middle East. While there are political and national aspirations for peace and security on internationally agreed borders, decisions in opposition of God’s clearly stated purposes for this region have proven to be lethal.

As the League of Nations made diplomatic decisions in variance to the Word of God, World War II resulted and 61 million lives were lost. According to Bible prophecy, the UN will shortly divide the land of Israel, which God calls His land. “…When I shall bring again the captivity of Judah and Jerusalem, I will also gather all nations…and will plead with them there for my people and for my heritage Israel, whom they have scattered among the nations, and parted my land.” (Joel 3:1) The Bible teaches in the Prophets and in the Book of Revelation, this period will be the worst time the world has ever known; countless millions will lose their lives as they rival against God Himself.

During this time, the 2,500 year old pre-Christian Bible prophecy teaches that the Jewish people will recognize Jesus as their Messiah, the Jewish leader destined to rule the world, Who was pierced on the cross for mankind’s sins. “…I will seek to destroy all the nations that come against Jerusalem. And I will pour upon the house of David, and upon the inhabitants of Jerusalem, the spirit of grace and of supplications: and they shall look upon me whom they have pierced…” (Zechariah 12:9, 10)

Christians would attest that Jesus fulfills hundreds of biblical Messianic prophecies. He was born in Bethlehem of the lineage of King David, performed many miracles, was crucified, buried and resurrected in Jerusalem at the exact time prophesied in the Book of Daniel chapter 9, 600 years previous to His birth.

Though Jewish people in general do not accept Jesus as the Messiah, mainstream Judaism acknowledges a sect of Jews that believe just like evangelical Christians. They identify themselves as Messianic Jews; Jewish by birth and Christian by faith. They have faced persecution in Israel just like the early Jewish Christians who authored the New Testament, as they aggressively proclaim that all Jews and Gentiles must turn in full repentance of sin and any philosophy contrary to the Bible. Their message is that the Jewish Yom Kippur, Day of Atonement, is finished for anyone who fully trusts Jesus’ atonement for their sin.

One of their main contentions with mainstream Judaism is that governments, kingdoms, and their methods will shortly be overthrown at Jesus’ return to Jerusalem, according to Bible prophecy, which they affirm to be perfectly accurate. They quote in support of this view, Old Testament and New Testament Bible verses. “And in the days of these kings shall the God of heaven set up a kingdom, which shall never be destroyed…but it shall break in pieces and consume all these kingdoms, and it shall stand for ever.” (Daniel 2:44) “…The kingdoms of this world are become the kingdoms of our Lord, and of his Christ; and he shall reign for ever and ever.” (Revelation 11:15)

A relative of a light horsemen, making plans for the Beersheba re enactment publicized that the ANZAC and Allied Campaign, giving the Jewish people their homeland in accordance with Bible prophecy, was preparation for the end of the world. He said, “In order for the imminent end-time prophecies to be fulfilled, the Jewish people must be in their land.”